I recently talked with Elaine Howard Ecklund, Professor of Sociology at Rice University and director of its Religion and Public Life Program. Elaine cohosts a new podcast, “Religion Unmuted,” and has written numerous articles and books, most recently, Why Science and Faith Need Each Other: Eight Shared Values That Move Us Beyond Fear. She’s also a good friend and mentor to Science for the Church.

The December 2 Upper House event, “Science, Race, and the Church: A Conversation about Repentance and Repentance” will feature Elaine, me, and Cleve V. Tinsley IV, Elaine’s former student and now Assistant Professor and Executive Director of the Center for African-American History and Culture at Virginia Union University. It’s not too late to join us—sign up here.

This Q & A excerpts a longer conversation.

What does a sociologist particularly bring to understanding science and religion?

One of the things that I’ve been attending to lately—and I know you’re passionate about as well—is seeing more racial and ethnic equality in science. Interestingly, part of this came through my studies of religion and science.

I’ve noticed in my broader studies of religion that Black and Hispanic people are, to use a term from social science, “over-represented”—that is, a larger portion participate in faith communities, particularly in conservative Christian communities, than are present in the general population. In fact, depending on the study, nearly 90% of Black Americans participate in a Christian community, compared to 65-70% of white Americans.

Yes, it is. When I studied those communities, I started to observe some interesting tensions with faith and science that weren’t present in largely white communities. There was a sense that science was not a discipline or a body of knowledge that has been concerned about justice. There was a kind of collective memory of the (1932-72) Tuskegee Syphilis Trials, for example, where the U.S. government did not tell men that were infected with syphilis and then continued to study them inappropriately for decades.

And the fact that that happened—the kind of thing that we can then safely call an evil act on the part of our government—that fact has been passed along in communities of color, particularly Black communities. It is one of the reasons perhaps that members of Black communities are less trusting of medicine and medical communities than they might be. When people in Black communities sometimes experience medical mistrust or mistrust of scientists, that is a problem for science and medicine. Understanding some of the root causes of this mistrust is important.

That’s happened more recently in my research in part as a result of my own social location and the types of things I’ve attended to in my past. I’ve been very involved in Black church communities in certain seasons in my life, and I think there are ways in which our own social locations can help us notice and help things show up for us that might not otherwise.

How can we take advantage of our full diversity and therefore get the most engagement with science as a culture and as a country? Is there something you think we should do as a culture out the research you’ve done?

My first foray into writing a book for a broad public audience is my most recent, Why Science and Faith Need Each Other. In that book, I try to grapple with theology and write specifically for a church community to give practical tools that churches in particular can use. I thought I was equipped, given my background, to shape my research towards Christian communities. One very practical thing churches can do is to bring in a diverse set of scientists to speak to children about their love of science.

What we usually do is we have debates. There’s a place for debates about knowledge frameworks. “Oh, here’s all the ways you can overcome the supposed conflict between religion and science.” I get that, but I’m not talking about that kind of work.

What I would like to see—and I think what the research points to—is having a diverse group of scientists come into these spaces. So, what about a scientist who is him or herself a Black Christian? Have them come and just talk about their love of science. Some of my research has shown that the social location of the messengers for science really matters. They can act as role models or exemplars about science for kids and young adults.

What if churches were seen as the kinds of organizations that fostered science diversity? I think that’s a kind of partnership that could happen between scientific communities and faith communities.

Elaine, this is not only something that you desire to have happen, it’s something you model so well. Thanks again.

Thank you so much. It’s been a pleasure to talk with you today. I really appreciate this opportunity.

Once again, we will go much deeper into this conversation about faith and science and the intersection with race tomorrow, Tuesday, December 2, with both Elaine and Cleve V. Tinsley IV at 11am Central. Register here for the Zoom link. 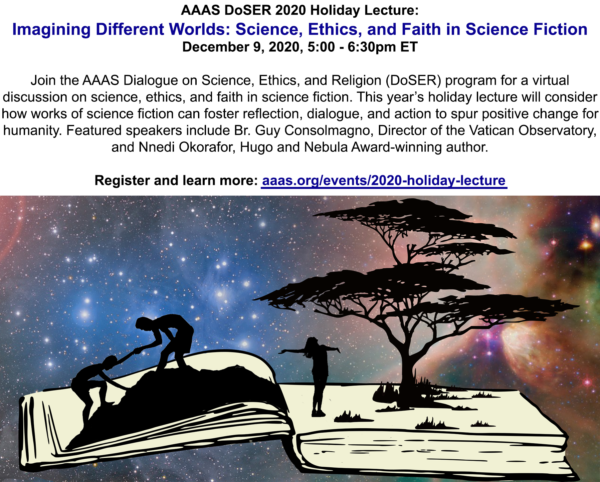