We’re always curious to know what interests you, and one way to figure that out is by noting which newsletters receive the most views. These are your top choices for 2020, beginning with (in my opinion) the most provocative question of the year.

Is the Church Undermining Itself?

Drew pondered whether we, as Christians, have internalized a widespread bit of misinformation—that faith and science don’t go together. I’ll let an excerpt speak for itself.

“To undermine the negative stereotype, we can use science that evokes awe and wonder to inspire belief in a Creator God. Using social and psychological sciences to study the interface of science and religion is still quite new, and so it is probably premature to draw too many conclusions. Nevertheless, having worked with a number of churches engaging science, I think it is safe to say that to overcome the negative stereotypes about Christians and science, we should preach the value of science and its compatibility with our faith while also drawing attention to both Christians in the sciences and awe-inspiring aspects of science.”

A World From Dust: Q & A with Biochemist Ben McFarland

As Drew put it last week, our goal is “to demonstrate that science can help the church do better ministry.” One key resource is the SftC network of scientists, which is why we asked scientist Ben McFarland how he puts faith and science together.

“Q: Is there one particular message you have for the church and its scientists?

God made it all—that comes first—and we figure out the details. Science can teach the church about how those details work, in the sense that biologists can teach about bios in the Greek, and chemists about atoms. But the church can also teach scientists, in the sense that it’s called to make disciples of all by opening a space for God’s spiritual life, zoe in Greek.”

Taking Science Out of the Service of Racism

This year, as both scientists and the church came to terms with their roles in the enduring sin of racism in America, SftC determined we needed to address the issue. You agreed—this was the most read newsletter of 2020. After discussing “scientific racism” and key events like the notorious 1932-72 Tuskegee Syphilis Study and (surprisingly) the 1925 Scopes “Monkey” Trial, I ended here:

“Why do I, as a Christian, care? Because racism is a sin. It subverts God’s vision for a flourishing humanity. As Revelation 7:9-10 (my italics added) describes it so beautifully, ‘There was a great multitude that no one could count, from every nation, from all tribes and peoples and languages, standing before the throne and before the Lamb, robed in white, with palm branches in their hands. They cried out in a loud voice, saying, “Salvation belongs to our God who is seated on the throne, and to the Lamb!”’”

Another colossal topic dominated 2020, COVID-19. We’ve spent much of the year, grasping the extent of the pandemic’s impact—it’s now taken the lives of one in 1,000 Americans. We wrestled with this reality early when, in the face of death—which science describes with exquisite precision—we contemplated the glorious message of the Resurrection of Christ.

“The strange heart of Christian faith is that… grief and loss go together in Christian faith with vision and hope in a singular way, because they are the story of Cross and Resurrection. There is no greater grief than Calvary, the crucifixion of the very Son of God by the ones he came to save. There is no greater hope than Easter. And the risen Lord of Easter made himself known to his disciples by the wounds in his hands, feet, and side. When we rise and reign with him over the new creation, he will be in appearance like a Lamb that was slain” (Revelation 5).

Jesus Christ, the Lamb who can “open the scrolls” of history, can also lead us into this new year. Confident of this, here’s to 2021. 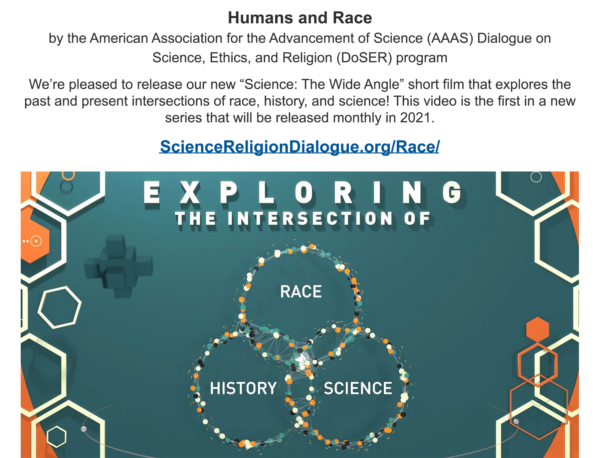